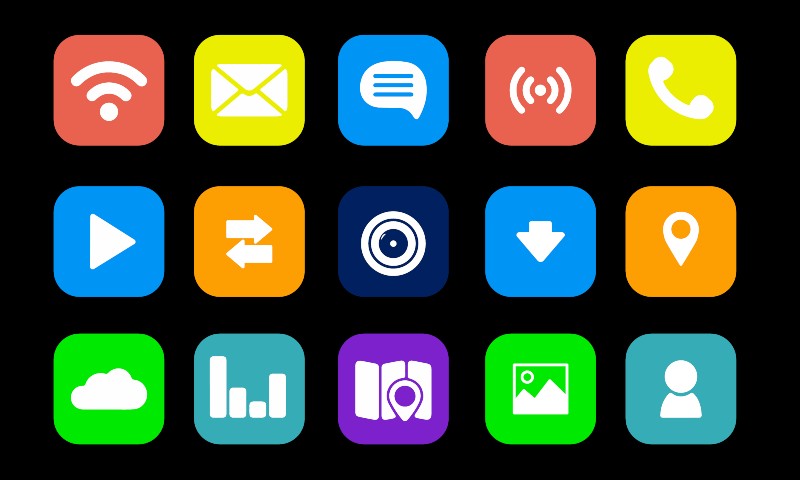 In my previous article, PWAs with Angular - Part 1: Understanding Service Worker, I walked through how to build a simple offline application using plain JavaScript and Service Worker. I recommend reading this as a prerequisite for learning to build PWAs.

Today I will talk about the key features of Progressive Web Apps, as well as how to build a Progressive Web App using Angular, and the tools that we can use to help acheive this. We will build a very simple Angular app, and then do the work necessary to transform it into a PWA.

What is a PWA

PWAs are applications which run in the browser, but also give the user the option to add the application to their home screen on mobile and tablet - much like a traditional mobile app. They also provide a partially or fully offline experience by caching files using Service Worker and serving up these files when the user is offline.

The key features of a PWA can be summed up as follows:

When to choose a PWA

Some use cases are better suited to PWAs than others. You may want to choose a PWA based solution when:

However, you may not want to choose a PWA as a solution when:

First we will build a simple Angular 7 app which, which we will later transform into a PWA. The source code for the finished application is available here.

Next, create a folder named models inside of your app folder and add a file named todo.ts:

For the next step, we are going to use the Angular HttpClient module, so import this inside of app.module.ts.

Create a folder named services, and inside of this add a file named todo-data.service.ts and add the following:

This is a service which fetches some Todo items from an API endpoint. We are using JSONPlaceholder, which is a free API that provides endpoints for fetching a number of different types of dummy data - perfect for the purpose of this tutorial! In the above we are fetching all the Todo items belonging to the user with a userId of 1.

Now we can bring all of this together in our app component. Inside of app.component.ts we make our Todo items available to the template:

Inside of app.component.html we subscribe to todos$ implicitely using the async pipe, and display them in a list.

And finally, inside of app.component.scss, we add some basic styles just to make our app look a bit better!

In addition to these styles, we will add normalize-scss.

Now the initial implementation of our app is complete! 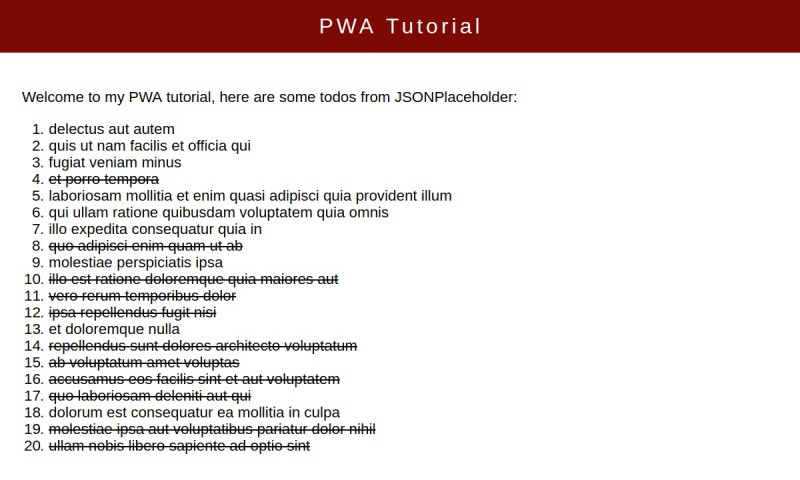 Lighthouse is an open source tool for auditing web application for a number of things, including Progressive Web App features. We will use Lighthouse to audit our app.

With the application running in Chrome, we can now open up the ‘Audits’ tab in the devtools, and click ‘Perform an audit’ to audit the application… Sadly, after doing this we see our application only scores 19/100 for PWA functionality. 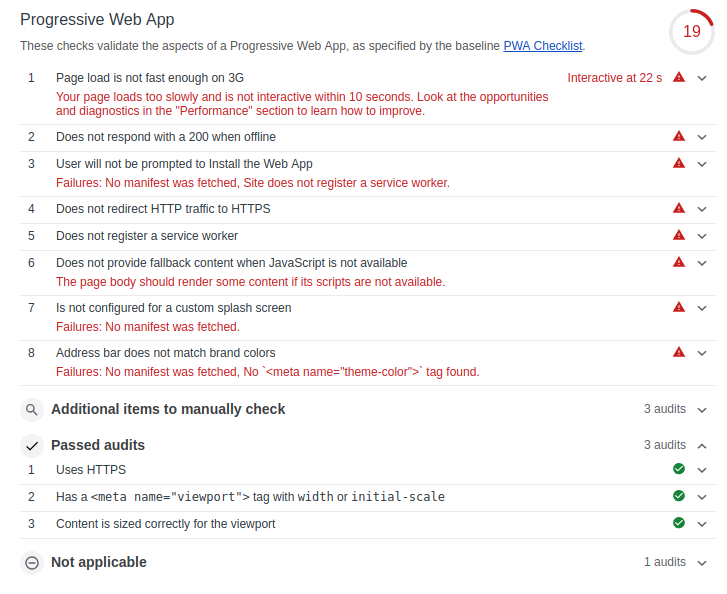 So, what is causing it to fail the audit and how can we address these problems? Firstly, “Page load is not fast enough on 3g” is to do with the fact that we audited a dev build and none of the files have gone through optimisation such as minification. “Does not redirect HTTP traffic to HTTPS” is due to the fact that we are running the app on localhost right now.

But what about the other problems?

Transforming our app into a PWA

Angular provides some tools which we will use for adding PWA functionality to your app.

This command will add and install @angular/service-worker and @angular/pwa. It will make the following changes to the app: 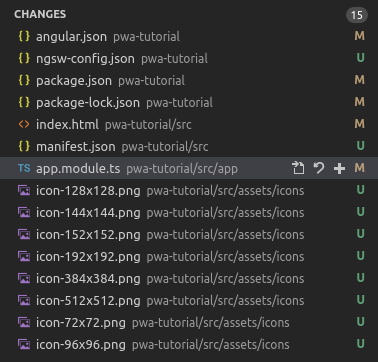 We can see that there is a manifest.json file in the root of the project. This file is what allows the app to be added to the user’s home screen on Android and iOS, and it is where we can configure how the app behaves when installed in this way. This files includes things such ash as the app name, the colors to use for the splash screen and UI elements such as the address bar, and the icons used for the app. Note that Angular has also added an icon for the app, at the multiple different resolutions required for different contexts.

A full explanation of the properties which can be used in the manifest file is available here.

Another file, ngsw-config.json, has also been added to the root folder of our project. This is not our Service Worker, but the configuration file for a Service Worker - Angular does not expose the actual Service Worker itself by default. However, it is very useful to understand what a Service Worker is and how it behaves in order to easily debug PWAs.

Inside of ngsw-config.json we see that first of all there is an index field, which simple points to the location of index.html. Next, there is an assetGroups field - this contains an array of groups of files we wish to cache, and the strategy we want to use for fetching and caching them.

The above group targets the .html, .css and .js files which make up our app, plus the favicon.ico. The installMode of prefetch tells Angular to download and cache all of these files the first time that the user loads the app and the Service Worker gets installed - as you can imagine, this is bandwidth intensive.

This group targets the app’s assets such as images and fonts - a different caching strategy is used here. The installMode is set to lazy, meaning that a file is not cached until a request for that file is made. The updateMode is set to lazy, meaning that when the app gets updated, if a file which has already been cached was modified in the update, the file will be fetched and cached immediately. This makes sense, as, for example, if we updated an image at a particular path in our app, we would not want the user then seeing the old version of that image.

Inside of app.module.ts we can see that Angular has added a line to register the Service Worker - note that this only happpens in the production environment (we wouldn’t ever want to cache files during development).

After simply adding the out of the box Angular PWA functionality, lets see how the app performs in a second audit. For our app to be able to install a Service Worker, we must do a production build and then run a HTTP server in our app’s dist folder rather than just using ng serve.

Now to build and serve the app:

When we run the audit again, we see that the app scores 92/100 for PWA - this is great! The only criteria on which it fails is serving over HTTPS - this is something which we do not need to worry about during development and should be dealt with at deployment time.

There are also some other manual checks mentioned, such as making sure each page has a URL, and that the app runs in all browsers (although the app won’t work offline in Internet Explorer as it is not supported). This is the case for our app, so for all intents and purposes it has passed the audit!

Now lets go into the network tab and set the app to offline mode. When we refresh the app we see the following: 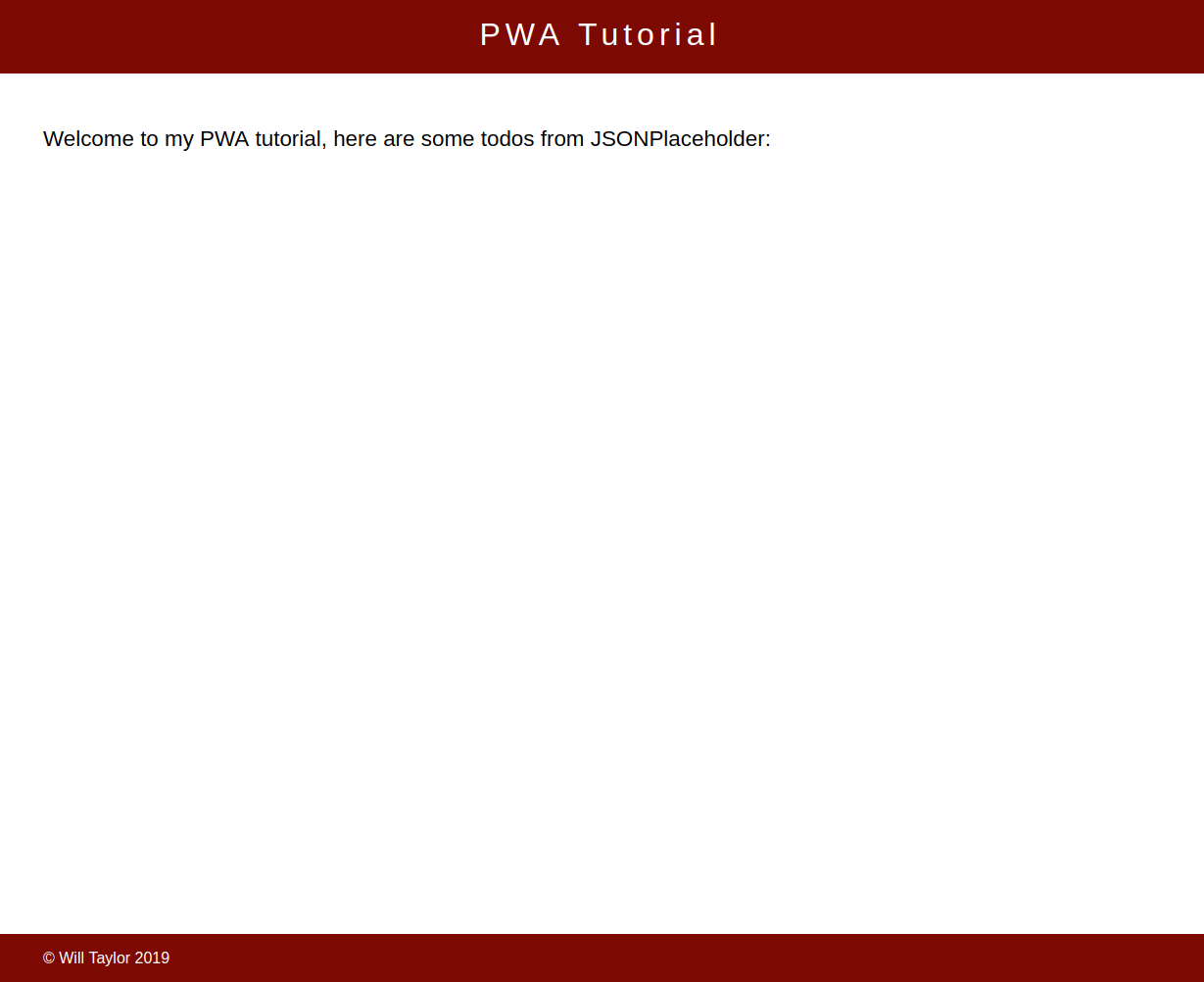 The static assets for the app are loading, which is a great first step, but the Todo data from the API is not. Luckily, the ngsw-config.json file allows us to specify dataGroups, allowing us to cache API responses.

This tells our app to cache responses from the JSONPlaceholder /todos endpoint and its subdomains, eg. /todos/1 and to only respond with cached results if the network is unavailable.

The full documentation for this is available here.

If we build the app again and run http-server, we can open the app in the browser and install and activate the updated Service Worker (you may be required to navigate away from the page and then back again to activate the new Service Worker). We now see that if we set the app to offline mode in the Chrome devtools network tab and refresh the page, the app is loading with the cached Todos.

There are other features of Service Worker we can use to implement further offline and native like functionality for our app, which I will not cover in depth here.