A complete guide to Angular libraries 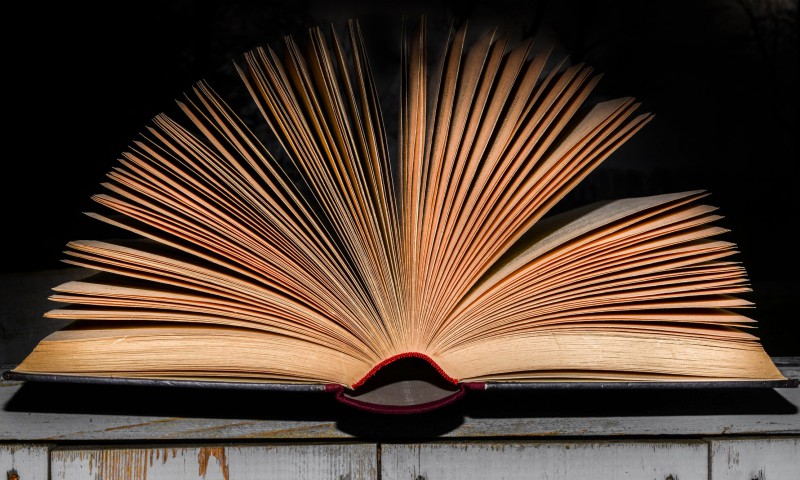 One of the things that was introduced in Angular 6 was the ability to create and build libraries with the Angular CLI.

When I first used this feature I was delighted at how simple it was, as while it was technically possible to create libraries using earlier versions of Angular, it was an altogether frustrating and saddening experience.

In this article, I will walk you the key elements of developing Angular libraries:

The full demo code for the library which we create can be found here.

Use cases for Angular libraries

From my experience, there are 2 common use cases for Angular libraries:

While there are lots of cases where an Angular library is a good fit for a project, it is worth considering whether your use case is one these, as it does introduce some maintenance overhead. Remember, you can always write functionality as part of a shared Angular module within your application and extract it out into a library when necessary.

We will create an Angular library, as well as a demo application to consume this library. We can create these with the following commands:

Using the --create-application=false flag prevents Angular from creating an application with the name ‘example-component-library’, which is the name we want to give to the library itself and not the test application, as explained here.

Lets now build our library and see what happens:

If we look in the dist folder, we will see that our library has been built and that inside of the build folder we have a number of different folders containing the application in various different module formats suitable for different consumers, as well as a folder containing TypeScript definitions.

This format is called Angular Package Format, and it is the format used as the output of ng-packagr, the tool which Angular CLI uses to transpile libraries.

The contents of the library currently look like this: 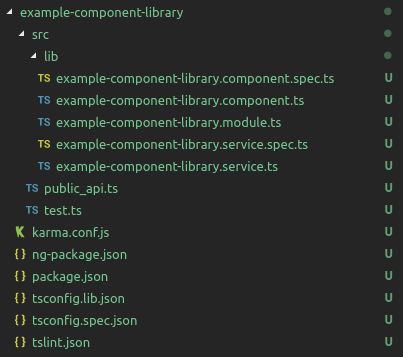 First, delete the existing example-component-library module, component and service files - we do not need these.

Next we will add a component, a pipe and a directive. We will follow a pattern of adding one component per module - this will allow a consuming application to import only the modules of the library which it is interested in, and then for all other modules to be tree shaken during the build process. I highly recommend doing this, as it will really make a difference to the size of your application bundles as the library grows.

After doing this our library should have the following folder structure: 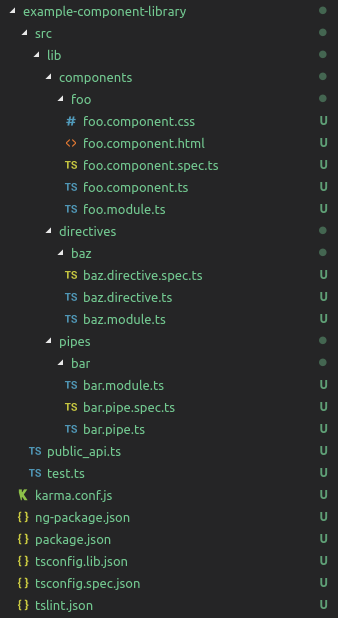 Of course this structure can be adjusted based on you or your team’s preference, but the important things to keep in mind are:

Next we must add each of the components we created to the exports of its module:

We now update public_api.ts to export any files in the library that we wish to expose to a consuming application:

Now all we have to do is rebuild the library, and it will be ready to consume the library from an application.

During development the best way to consume our library is using npm link. This will allow us to symlink from a directory in our consuming application’s node modules folder to the compiled application in the library’s dist folder.

We can link an Angular project to this library from anywhere on our local machine. From the project root folder:

If we now run the library with the watch flag, and at the same time run ng serve in another terminal window.

This will allow us to develop an application and (one or more) linked libraries simultaneously, and see the app recompile with each modification to the library’s source code.

For production, we will publish our library to npm, and then have it installed into the application using npm install.

First, you will need to create an npm account. Now login from the command line:

From the project root folder:

Our package is now published on npm (publicly), and we can install it by adding it to our application’s package.json dependencies and running npm install:

Angular is specified as a peerDependency rather than a dependency in order to avoid having the consuming application install multiple, conflicting versions of Angular. This article has some good information on peerDependencies and when to use them.

We have seen how we can create an Angular component library which can be consumed by multiple different Angular applications, as well as how we can work with libraries in development and publish them for production. Below I have listed the resources I have found useful for learning about Angular libraries myself, and for writing this article.