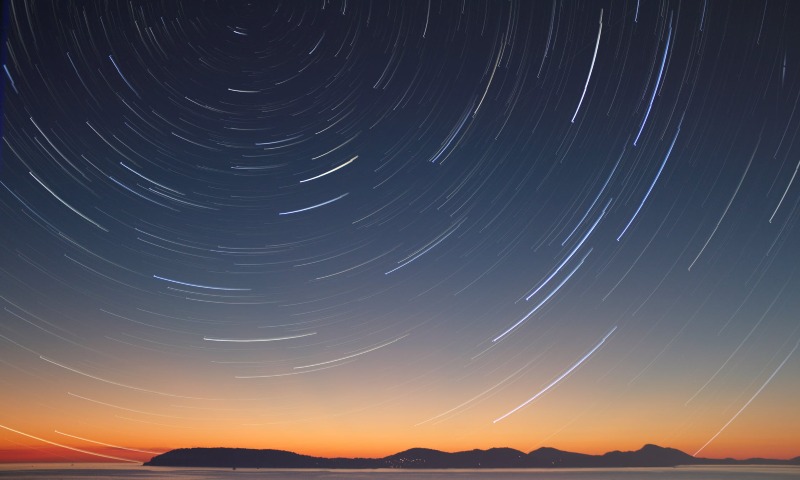 Angular Universal is a technology which allows you to create Angular apps that render both in the browser and on a Node.js server. Unlike a normal browser rendered Angular app (single page application), a Universal app is indexable by search engines and social media crawlers, allowing it to reap the benefits of SEO.

In the article, I will discuss why you might use Angular Universal and what the alternatives are, how Universal works at a high level, and how to get started. I will then do a deep dive into the code that makes up an Angular Universal application. Finally, I will talk about transferring data from a server rendered Angular application to a client rendered application via the Angular TransferState module.

If after reading this article you would like to learn more about Angular Universal, the following Udemy course has a dedicated section on it, as well as covering many other important Angular concepts (affiliate link):

Why use Angular Universal?

There are 3 main reasons to use Angular Universal:

At this point it is worth touching on another solution - prerendering - which achieves the same thing as universal rendering, but in a different way.

Prerendering aims to solve the same problem as Angular Universal.

Prerendering has both advantages and disadvantages compared to universal rendering.

For sites which do not regularly update their content and do not have any ‘dynamic’ route parameters, prerendering is usually the simpler and better solution.

I will not discuss prerendering any further in this article, but I recommend this tutorial for getting started with prerendering in Angular.

Lets first look at what happens when an Angular single page application loads, and then compare this to what happens with Angular Universal.

The sequence of events through which the page is loaded when a user navigates to an Angular single page application goes like this:

When a user navigates to an Angular Universal application, the sequence of events through which the page is loaded goes like this:

Getting started with Universal

It is super easy to set up an Angular Universal application with the Angular CLI.

For the purposes of this article you can clone the following repo, containing an Angular single page application which we will later transform into an Angular Universal application.

If you build and serve this application, you will see that what we have is an application which requests a collection of Studio Ghibli films from the Ghibli api and then sorts and displays them. Lets get to work transforming this into a Universal app!

And then to build and serve the application with universal rendering:

Well done! You have just created, built and served an Angular Universal application! 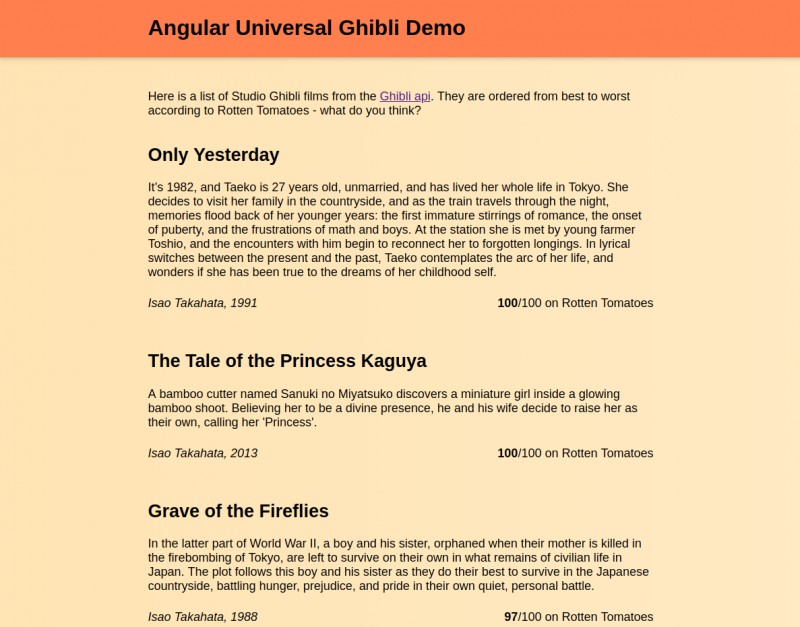 If we look at the codebase for this application, we see that Angular has made quite a few changes in order to transform it into a Universal app - we will take a look at these now.

A deep dive into an Angular Universal app

Lets take a deeper look at the changes that were made to transform our Angular single page application into an Angular Universal app. Conceptually, we can divide up the changes which have been made into 3 areas:

Lets take a more detailed look at each of these in turn.

Inside of server.ts is is your Node server code, it is where the server side rendering of the application takes place.

When I first came across this file, as an Angular developer who deals with primarily frontend JavaScript and not Node or Express, it took me a bit of time and research to understand what was happening.

Lets break this down and look at it one section at a time.

In this first section we:

On to the next section:

In the above, the app.engine function call registers Angular’s ngExpressEngine as the templating engine to use for .html files.

Here, we handle the routing for GET requests made to the server.

We then start the server using app.listen - it will listen for requests on our specified port.

A few build scripts were added to package.json:

You will also see that some additional files webpack.server.config.js, tsconfig.server.json have been added in order to to facilitate these build scripts, as well as some modifications to angular.json.

3) Changes to the application source code

If we look at the application source, we see that 2 files were added:

In the case of a Universal application which makes requests to an API in order to render the page, there are a couple of problems.

The TransferState module provides a solution for transferring application state from the server to the client. From the Angular docs:

We can use this module to store responses from http requests - we give each response a key, and then retrieve it on the client.

Lets demonstrate this by adding the TransferState module to our demo application that we created earlier.

If you watch the page load of our Angular Universal Ghibli app, you should see some flickering as described in the previous section. We will now implement a solution for transfering state from the server to the client in our Ghibli films demo application.

Next, lets create an interceptor, which will intercept HTTP requests and store them using TransferState as necessary.

We add the following inside of src/app/interceptors/transfer-state.interceptor.ts:

Now if we rebuild and run the app, we see that the flicker on the initial page load is gone. If we look in the network tab then we can see that the browser no longer makes a request to the Ghibli api - excellent!

But how does this work? How does the server transfer this state data to the client?

If in the browser we go to the network tab and look inside of the index.html which gets served up for our application, we see the following at the bottom of the file:

We can see here that TransferState stores the application state data inside of a script which gets appended to the end of index.html during the server render!

We then looked at how to get started with Universal by transforming an existing Angular application into an Angular Universal app, and we did a deep dive into the code which gets generated when we create a Universal app with the Angular CLI tools.

Finally we went through how to add the Angular TransferState module into an application, and implemented an interceptor to handle state transfer functionality.

The code for the completed Angular Universal Ghibli Demo application can be found here.

If you found this article useful, I recommend also reading my Angular Universal gotchas article.

I highly recommend the following Udemy course which has an excellent section on Angular Universal, as well as covering many other Angular concepts (affiliate link):

In addition, the following were really helpful for writing this article, and I very much recommend them as further reading: